“I love people. I love my family, my children . . . but inside myself is a place where I live all alone and that’s where you renew your springs that never dry up.”

The Sun ☉ returns to the introverted, mysterious, and private cardinal water sign of Cancer ♋ at 6:09pm CDT on June 20, 2012 signifying the start of the 2012 summer solstice! Each time the Sun moves into a cardinal sign, we experience a change of seasons. (Aries= Spring, Cancer= Summer, Libra= Fall, Capricorn= Winter). Similarly, people with an abundance of cardinal energy possess an urge to constantly initiate. For Cancer, motivation explodes from emotional convictions and a threatened sense of security. The airy and objective visions of preceding sign, Gemini, turn to subjective memories laced with vivid emotions in Cancer. As the first of the emotionally oriented water signs, the sign of the crab represents the process of navigating the inner workings of ourselves, and is characterized by the keywords, I Feel.

“In ancient astrology the condition of ‘moistness’ was viewed as the capacity to release emotions and connect with other beings. Moisture blurs the boundaries that define us as distinct individuals, allowing empathy, sympathy and a shared experience of personal or collective events…When we become too emotional the natural reaction is to release the ‘excess of water’ through the shedding of tears.”

There’s a fairly comical section of Mapping the Psyche that speaks of twelve people representing each sign of the zodiac waiting for waiting for a late bus. Of course, everyone is made up of the energies of different signs. However, the words chosen to describe the archetype of Cancer while waiting for the bus are among the funniest, but also the saddest.

“Cancer on the other hand, feels personally let down, and can be thrown into despair and a curious depression by the late arrival of the bus.Retreating into her shell, she remembers clearly what it felt like in her childhood when her mother was late picking her up from school. Her stomach churns at the memory, and she remembers clearly the feeling of abandonment as she waited, all alone, in the deserted playground at the end of the school day. How typical it is that, while she is always there for other people, she can’t rely on anyone else being there for her.”

The depiction of Cancer at the bus stop is a parody of the sign’s acute awareness of the past. Here is a sign that vividly retains memories and feelings, and does not easily bury slights against them. Despite Cancer’s connection to the emotions, you are not likely to always see natives of this sign wear their heart on their sleeves! Like the crab, they tend to contain their true emotional selves tightly wrapped within their shell. You can typically discern an evolved Cancerian by their gentle, sympathetic, imaginative, nurturing, contemplative, intuitive, nostalgic, and protective nature. At worst, the sign borders on being self-absorbed, insecure, irrational, defensive, overly conservative, and moody. 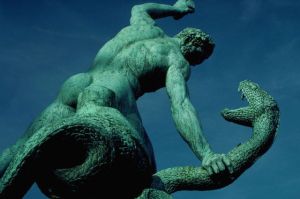 Cancer is one of the fainter constellations in the sky and also faces backwards, indicating the sign’s attachment to the past and common affinity for history and heritage. Furthermore, the constellation stems from the mythology of Hercules as he battled Hydra. Hera, sent a giant crab to assist Hydra, but Hercules smashed and killed it with his foot. In honor of the crab, Hera placed its likeness in the stars. As someone possessing Cancerian energy (Cancer Ascendant) I have always thought that this myth was very lame.

I stumbled upon an alternate interpretation of the mythology of Cancer derived from the Scriptures of Delphi. In this version, a giant crab named Crios was guardian to Poseidon’s sea nymphs and sustained serious injuries from destroying a giant squid that threatened their safety. Poseidon celebrated the crab by creating the constellation of Cancer. I like the alternative myth because it represents the trademark protective nature of Cancer, and its willingness to always fight for the underdog. Therefore, I propose another set of keywords for the sign, “I Protect“. Have you ever seen a mother fight for their child? This is Cancerian energy at work and also why this sign is associated with the concept of family. Threatening the home of, or people close to the heart of a Cancerian is certainly the quickest path to experience their wrath. 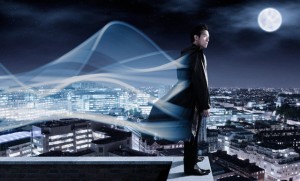 The Moon is the fastest moving and most complex of the 10 planets used in modern western astrology, and its constant phase changes are reflective of our emotions, habits, and instincts. Oftentimes Luna is also indicative of how a person perceives their mother, and the relationship that natives of this sign have with their mothers is often of great importance. As one of only two traditional planets associated with feminine energy (Venus being the other), the Moon and Cancer are linked to the breasts and stomach. Lunar people are often imaginative, creative, intuitive, private, sentimental, introspective and protective. CafeAstrology describes the Moon as ‘a mediator between the inner world and the outer world.’

Grant Lewi in Astrology for the Millions eloquently describes the nature of the Moon in astrology:

“Thoughts that do often lie too deep for tears” are the thoughts of your Moon’s nature. The wordless ecstasy, the mute sorrow, the secret dream, the esoteric picture of yourself that you can’t get across to the world, or which the world doesn’t comprehend or value – these are the products of the Moon in your horoscope.”

Figuring out oneself is no simple process, and the nature of this water sign is known for a similar level of complexity. House IV is also known as the Nadir or Imum Colei, and is one of the four important angles of a natal chart. Basic astrology books will tell you that this is the house of beginnings and endings, and indicative of one parent, but the primary function of House IV serves as the internal and external foundation from which we journey away from, and ultimately return to. The realm of the fourth is distinctly separate from who we are in the face of the public, and is oftentimes difficult to put into words.

“Fourth house territory is what you find when, late at night, you close your eyes. It’s what you encounter when you’re all alone in the dark. Planets here lie beneath your surface. They are as deeply private as those in the opposite 10th are inescapably public…

Your family will be there, in your memories. Your ancestors will be there, in the rhythmic pulse of your blood. Your home will be there, as the secure base that allows you to connect with your innermost self. But you’ll discover even greater mysteries. In the 4th you’ll find your spirit center, your life source, your inner country of renewal. There will be times when you need to recreate yourself – and you’ll do this by descending into the 4th house first.”

In a more recognizable sense, House IV can provide insight into a person’s family or domestic environment. People with planets here often possess a great desire for security and are inclined towards providing a pleasant domestic environment, such as through cooking.

Cancer ♋ vs. Capricorn ♑ – Public Vs. Private Self 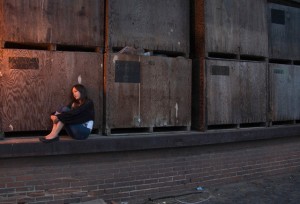 If you’ve ever been close to a Cancer or someone born with the Sun in House IV, you have most likely experienced their inclination towards privacy. Like the ebb and flow of the tides they are sometimes inconstant, disappearing to engage in periods of introversion and self reflection. Some may even tend towards being shy and awkward. Opposite sign, Capricorn is characterized by a healthy sense of ambition and the associated House X represents our public identity and career. Consequently, Capricorns may sometimes tend towards rigidity and emotional suppression. In relationships, this pair of opposites tends to polarize, resulting in the Cancerian becoming increasingly emotional while the Capricorn becomes more withdrawn.

“Cancer values emotional safety and comfort above all else, and will rush to the rescue if we’re feeling hurt or lonely. It will do whatever it takes in order to make us feel comfortable and loved (often drawing from experience of what has worked in the past to remove emotional discomfort.)

Capricorn values discipline and self-sufficiency more than emotional comfort. It does not like emotional vulnerability, and might even consider it to be weak in some way. It would rather show us how to become stronger and more skilled so that we can take care of ourselves better in future.”

Ascendant in Cancer ♋ – Ebb and Flow

I was born under the influence of a Cancer ascendant and I must admit that the is one of the more difficult ascendants to explain because it is so subjective and linked to facets of ourselves that often can’t be put into exact words. Sometimes it is a tidal wave of emotions, memories, and impressions. Other times, it’s the perfect extrasensory guiding tool providing helpful charisma and allowing one to find favor and common ground with people from all walks of life.

Stars Like You has one of the better descriptions of the Cancer ascendant that I’ve read online:

“With Cancer rising, self-realization comes through a sophisticated attunement to the feeling nature. You need to make sense of life through your senses and emotions. You will be gifted with strong intuitions, and even a psychic sensibility. You are likely to be extremely sensitive to the world around you and may need to recognize, and own, emotional realities. This means acknowledging your sensitivity, accepting your strong desire to nurture and support others, and recognizing how this sensitivity may mean that you tend to take on too much from the environment in which you find yourself, or become overly responsible for what others are feeling.

Although I possess disdain for the word sensitivity when used to describe Cancer and Pisces, I definitely feel that the Cancer ascendant produces a native who is very emotional, intuitive, and nostalgic. In the case of Cancer, the aforementioned sensitivity to stimuli is often properly contained within a “shell”. However, during those rare days on which I feel somewhat emotionally volatile on the inside, I remind myself to purge these emotions, usually through music or writing. Thus, the act of catharsis is incredibly important for those with an abundance of Cancerian energy due to the sign’s tendency to retain memories and emotions. Also, I can’t think of anything that motivates me more than when my convictions are birthed from powerful emotions!

Jesse Lacey of Brand New was born on born July 10, 1978 under the cardinal water sign of Cancer ♋

aph·elion
noun \a-ˈfēl-yən, ˌap-ˈhēl-\
plural aph·elia
Definition of APHELION
: the point in the path of a celestial body (as a planet) that is farthest from the sun.

The Ecliptic, with Garron Ballard!

On Hiatus During Fall 2012
on COOG Radio Houston

Error: Twitter did not respond. Please wait a few minutes and refresh this page.